As the COVID-19 pandemic ravaged the Hawai‘i restaurant industry devastating restaurant owners, suppliers, service workers and their families, Central Pacific Bank Foundation wanted to find a way to provide direct help to restaurants, consumers, and the overall economy. The team set out to create and launch a social media campaign consisting of media opportunities, a logo, landing pages, a mechanism to allow processing requests for payment, a print ad, and a social media video – in a total of five frenetic days. The objectives were to raise public awareness of the hardships being faced by local restaurants; deliver customers to restaurants during this critical time; set an example for other local businesses to encourage them to find ways to reach out to the community and provide tangible assistance; illustrate CPB’s commitment to the community and small business; and create fun on social media during an extremely stressful time.

The team developed a simple campaign premise – the CPB Foundation would reimburse customers for half of their dine-out bill from local restaurants between March 26 and April 1, 2020. Anthology created a multi-pronged campaign dubbed #KeepHawaiiCooking, with an extensive social media presence on multiple platforms. Anthology created a logo and assets, and built a microsite and a mechanism for processing and paying reimbursements. The team also planned an extensive advertising campaign to promote #KeepHawaiiCooking. Fortunately, however, after one print ad, our initial social media posts, and strategic public relations support, the campaign went viral. The public fully embraced the program, posting photos, videos, and stories about how they personally were keeping Hawai‘i cooking. With hundreds of thousands of social interactions, the originally planned advertising budget was rendered unnecessary. 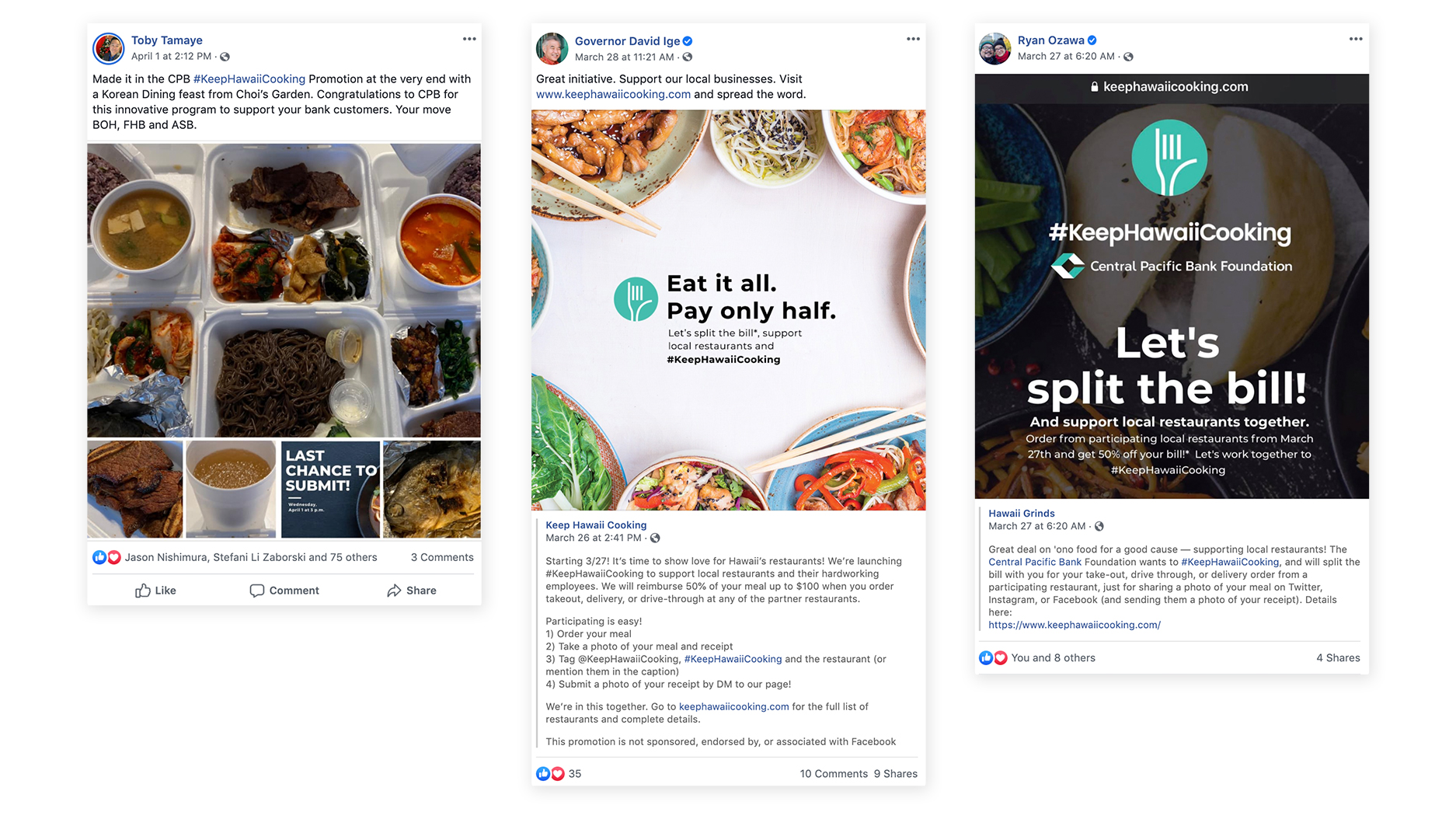 An army of AMG team members took shifts on Instagram, Facebook, and Twitter – monitoring for positive and negative posts, responding to all consumer questions, verifying, and processing receipts, and thanking those who participated in supporting local small businesses. The CPB Foundation planned to support the program with up to $100,000. CPB’s final tally topped $300,000, which meant that more than $600,000 was spent at local restaurants. The #KeepHawaiiCooking campaign served up 10,162 meals and in six days, gained 14,200 Instagram followers, 3,488 Facebook followers and 427,877 web landing page views. Additionally, there were significant increases in brand regard for CPB. Another benefit was that CPB gained business clients because of the program and its support for small business, even though the goals were altruistic and not aimed at customer acquisition. 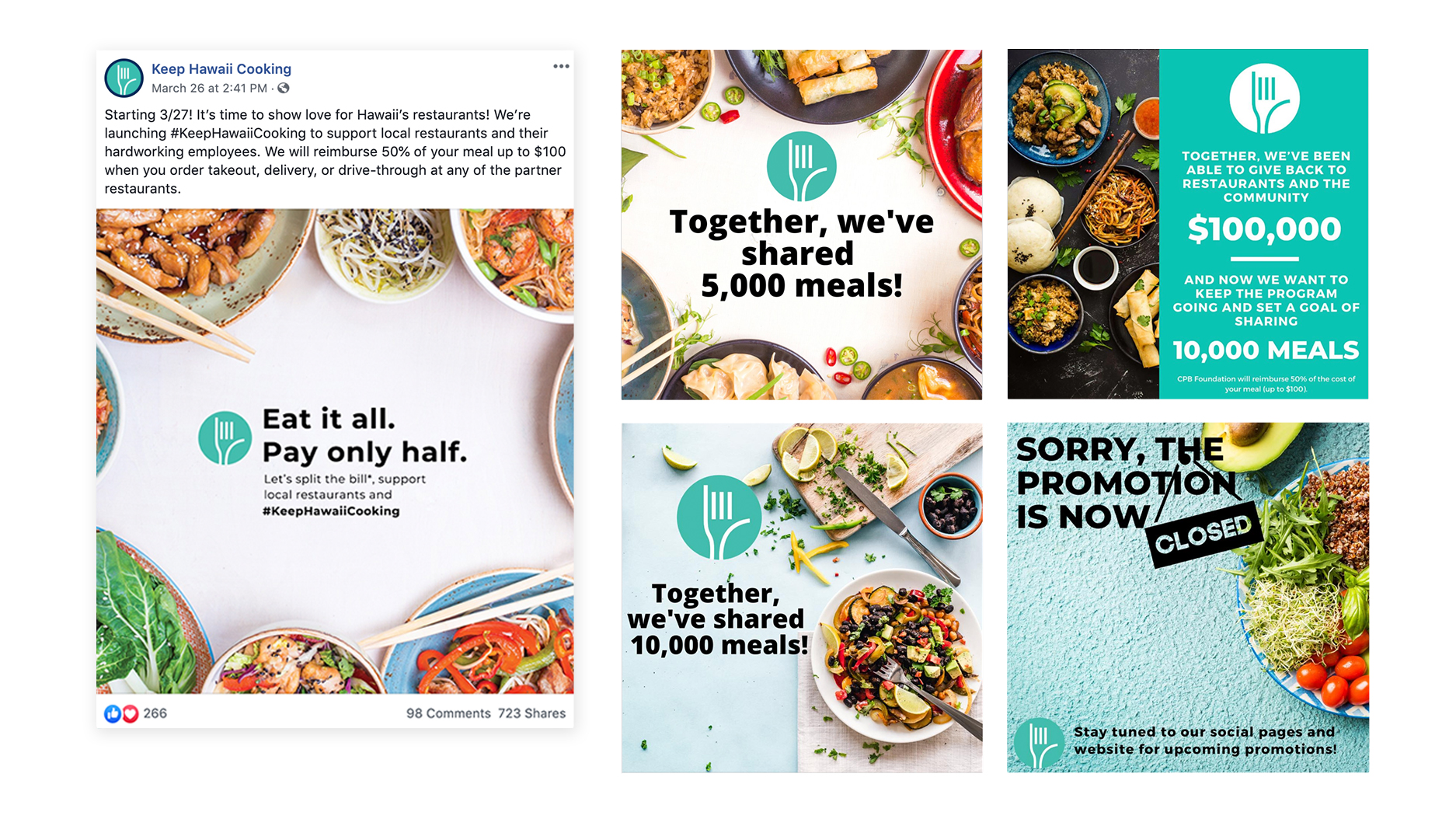 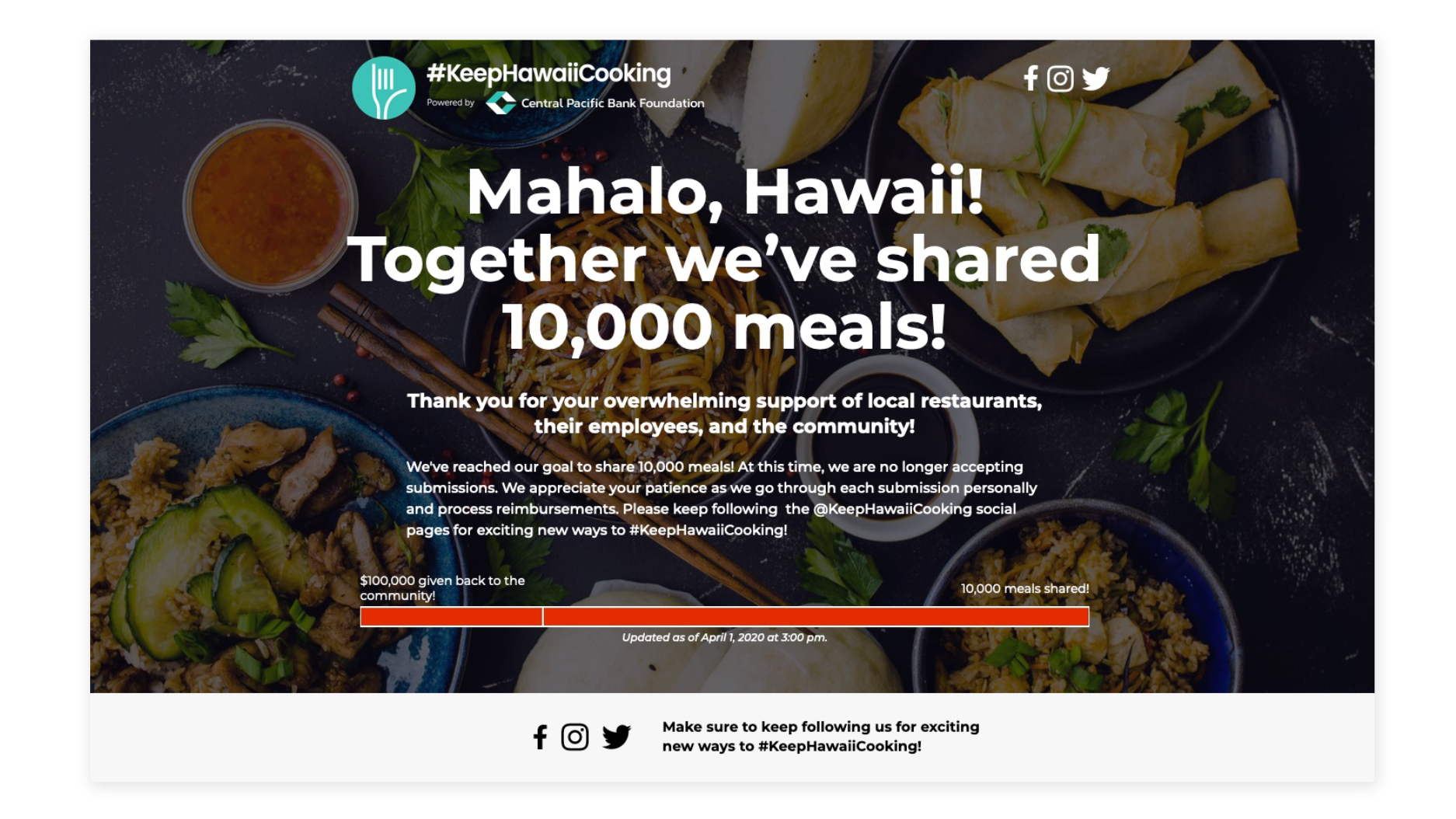