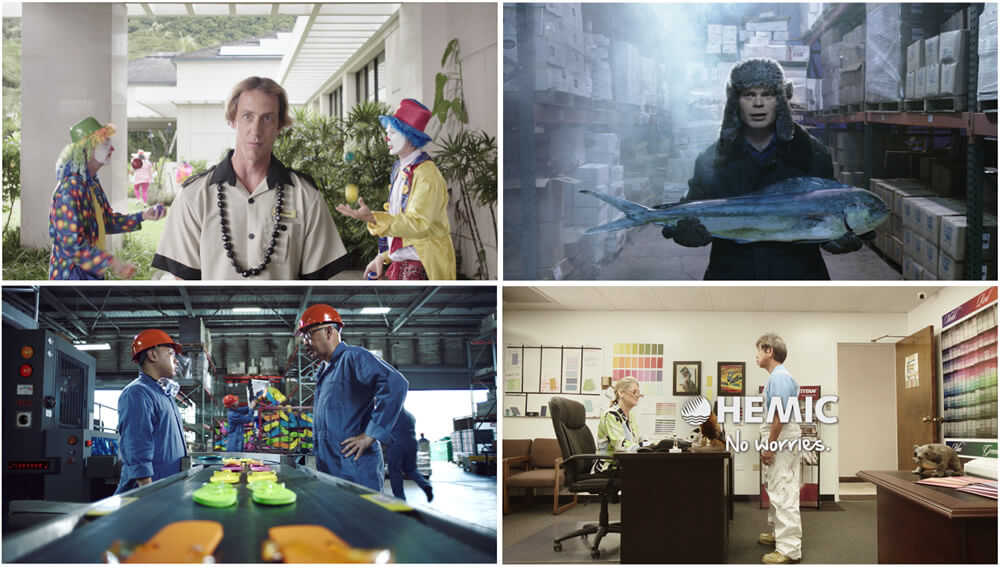 Hawaii Employers’ Mutual Insurance Company (HEMIC) isn’t a typical insurance company. HEMIC strives to stand out from the pack of commodity insurance providers. The company wanted to rebrand in a way that showed off its unique attitude, as well as their singular area of expertise – workers' compensation.

Anthology’s solution was to focus HEMIC’s media on television – in particular, during news and sports programming – where business owners and managers continue to consume most of their media. We also wanted to acknowledge head-on the fact that business owners and managers have enough to worry about without having to worry about their workers’ comp insurance.

And we wanted to push that point to a bit of a comic extreme. So instead of ads about insurance – which HEMIC’s audience already understands, and about which nothing new can be said – Anthology’s ads told stories about more pressing business concerns; The travails of an overworked human resources director, a seafood company that has a “clam-tastrophe” of a roadway accident, a paint store that runs out of every paint color - except orange, a meltdown at a rubber-slipper factory and what happens when a clown convention descends on a local hotel.

For their 20th Anniversary year HEMIC decided to switch gears and focus on more serious storytelling. The television creative showed a construction worker’s dramatic and emotional return to work – and the salute he receives from his fellow employees.