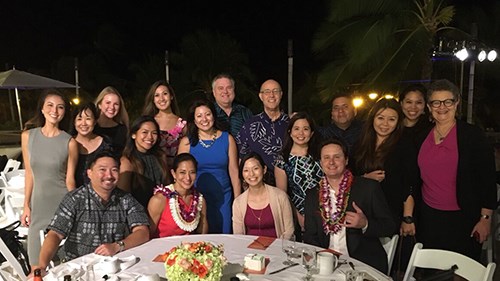 A dozen manapua. A dozen malasadas. A dozen plate lunches from Alicia’s Market. And most recently (even though we can’t eat ‘em), the 12 public relations awards Anthology was honored with at the 33rd annual PRSA Hawaii Koa Anvil Awards.

• “Introducing the #InstaFamous to #HawaiiIsland”

• “Groundbreaking for Ka Makana Alii: The Center for West Oahu”

Three Koa Hammer Awards of Excellence were awarded to Anthology for:

“It was a great evening for Anthology at the PRSA Hawaii Koa Anvil Awards as our excellent work done across all of our groups was honored this year,” said Nathan Kam, Anthology partner and president of public relations. “We have an amazing and talented team here and it makes me really proud to see our full team’s efforts recognized amongst our peers.”

A total of 89 awards in Koa Anvil and Koa Hammer categories were handed out at this year’s awards ceremonies, held on July 28 at the Hyatt Regency Waikiki Beach Resort and Spa’s SHOR restaurant. PRSA Hawaii also recognized three members who achieved Accreditation in Public Relations (APR) credentials over the past year. Among the newly anointed APRs was Anthology Marketing Group’s own David Pettinger, who is also the current president of PRSA Hawaii. Congratulations, David!

And congratulations to our Anthology team on its award-winning work!