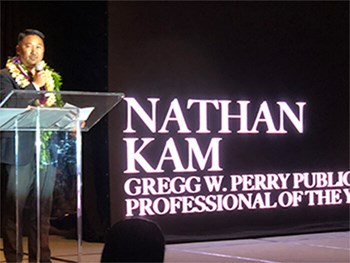 In addition (and a big addition, at that), our very own Nathan Kam, Anthology partner and president of the firm’s Public Relations Group, was named 2018 recipient of PRSA Hawaii’s Gregg W. Perry Public Relations Professional of the Year for exemplary work accomplished in his more than two-decade career. The Perry award honors Hawai‘i public relations professionals who have made major contributions to their profession and applied public relations techniques professionally to achieve impactful objectives. Nathan is a past PRSA Hawaii Chapter President (2010) and, in his commitment to public service, serves on the boards of Junior Achievement of Hawaii, Honolulu Festival Foundation, JTB Goodwill Foundation, and the PRSA Travel and Tourism Section. He is also chair of the Pacific Club’s NextGen Committee and a mentor in the Chamber of Commerce Hawaii’s Young Professional Program. Congratulations, Nathan!

More than 70 awards in Koa Anvil and Koa Hammer categories were handed out at this year’s awards ceremonies.

Congratulations to our Anthology team on all of its award-winning work!